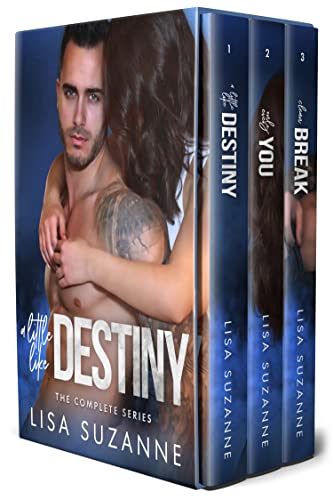 For the first time, this contemporary forbidden trilogy is available in one collection that includes three full-length #1 bestselling rock star romances plus brand-new bonus material. Will the bad boy rock star or his hot CEO brother win the girl?

Included in this collection:

BOOK 1: A LITTLE LIKE DESTINY
Reese can hardly believe her luck when she scores backstage passes to meet her favorite band, and ending up at the lead singer’s penthouse for just one night is her every fantasy come to life. When she tries to move on from that night by dating someone new, she never imagined she’d end up torn between a rock star and his hot CEO brother.

BOOK 2: ONLY EVER YOU
Despite the temptation of one man, Reese commits to the other. When a family crisis strikes, she’s forced into the arms of the wrong man. How will she comfort him when she longs to be with his brother?

BOOK 3: CLEAN BREAK
After two brothers shatter her world in the most catastrophic summer of her life, Reese is determined to start over. When she receives a desperate call from someone she thought she’d never hear from again, she’s forced to confront the love she could’ve had. Will Reese get her clean break, or will she be forced back into everything she’s trying to escape?

Plus bonus material including two prequel stories and two brand-new chapters written in the point of view readers have been begging for!